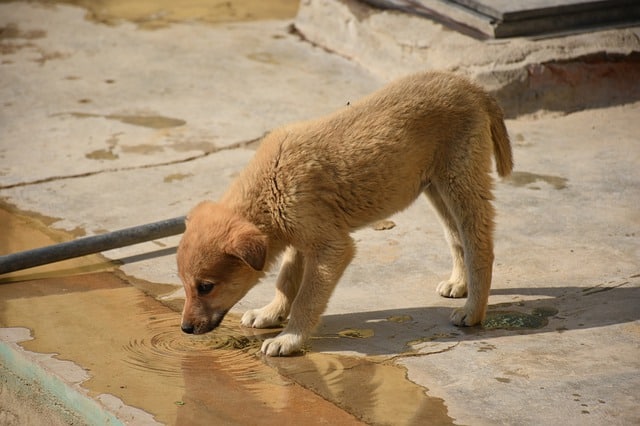 Most people say a dog is man’s best friend and requires special attention, ranging from sanitation and nutrition to hydration requirements, in raising it.

Do you intend to raise a healthy and well-hydrated puppy? Introducing water to a puppy’s diet too soon or too late is detrimental to the puppy’s growth, and well-being. Therefore, we have done informative research on puppies’ water needs, and we have put it incomprehensibly in this article.

The ASPCA states that mother dogs initiate weaning when their puppies are approximately three to four weeks old. Until the puppy gets to this weaning stage, he gets all its dietetic requirements from its mother’s milk.

At around four weeks, gradually work solid food into the puppy’s diet. You could try mixing dry kibble in puppy formula or warm water to make a mushy gruel.

When your four-week-old puppy starts developing a liking for solid food, you must supply clean drinking water for the puppy.

At this stage, water becomes one of the vital nutrient needs. The puppy’s food should supply most of the hydration requirements, but it’s critical to keep a fresh water supply easily accessible.

Ensure that you have a shallow, spill-proof container with fresh and cool water that your four-week-old puppy will be able to access at all times. Hopefully, the little, adorable puppy starts to mimic the mother’s water drinking habits.

Whether your puppy will drink water at the age of four weeks depends on his behavior patterns. Naturally, all puppies are brought up in different environments and adopt a specific behavioral pattern according to their upbringing.

Some puppies may take to drinking water quickly while others may be hesitant, usually short-lived in most cases. If the puppy’s mother is slightly late in beginning the weaning process, your puppy may not yet have any exposure to the ubiquitous liquid.

The most appropriate time to introduce your puppy to solid food and water is around three to four years. While older dogs can drink water that’s straight from your tap, puppies should be started with bottled water or tap water that you’ve brought to a boil and allowed to cool off.

Place the puppy’s drinking water in the shallow, spill-free bowl that your puppy can’t fall in. A fascinating fact about puppies at this age is that they tend to climb into the bowl and get themselves wet, so don’t get a heart attack when you find the puppy wet.

The second option is attaching a water bottle, like those used for watering other small pets, to the side of your whelping box or whatever different types of enclosure in which you are raising your puppy.

For a more intimate first water taste, you can cup your hand and allow the puppy to drink from there. Gradually adjust the watering techniques until your puppy is in a position to drink on their own.

The importance of water to your puppy

Water is a crucial requirement in any canine diet for healthy development, puppies included. The water helps keep your pup hydrated.

It also keeps his cells working efficiently. Sufficient water in the puppy’s body aids in digestion, ensuring your puppy absorbs as many nutrients as possible from the food.

With enough water, your puppy is in an advantaged position to regulate body temperature accordingly in different climatic conditions. More playful puppies require an additional amount of water in the summer period.

How Much Water Does a Puppy Require Daily?

The amount of water that your puppy is likely to take per day is determined by several reasons including the volume of blood in the puppy’s circulatory system, playfulness, and the weather.

For every pound of your puppy’s weight, he requires at least half to a full ounce of uncontaminated water.

Naturally, a puppy survives on the mother’s milk for a time. Due to lactating, the mother can’t survive without water and needs to be continuously watered.

By the time your puppy is four weeks old, water becomes a mandatory part of his diet. Enjoy the upbeat, playful nature of your puppy by maintaining a continuous flow of clean, uncontaminated drinking water.