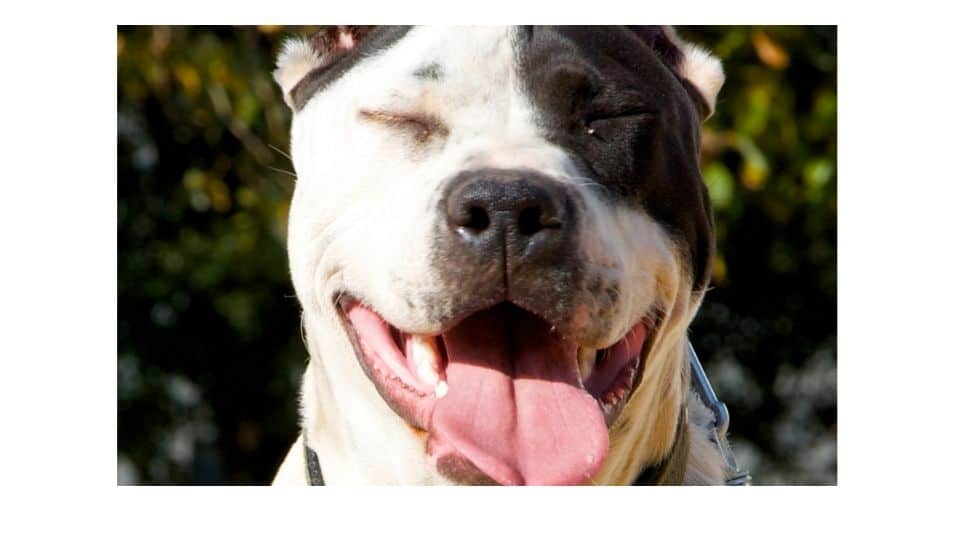 Animal scientists have yet to determine the precise meaning of a doggy grin. But dogs of various breeds do indeed exhibit an expression that looks like a smile.

And they usually do it along with other behaviors that indicate they’re in a good mood. The doggy grin generally involves a loose jaw, hanging open so the tongue laps over the teeth.

Though the teeth are exposed, there is no appearance of aggression. (Pitbulls, in fact, seem to be better than most breeds at “smiling” with their mouths closed.)

Many dog owners are confident that the grin means their dog is happy. And they’re in the best position to know since each of them is well acquainted with the particular dog in question.

Often, too, the grin is accompanied by other behaviors associated with canine pleasure, such as fast tail-wagging; a loose, wiggly belly; soft, relaxed eyes and flopping ears; and perhaps even rolling over for a belly scratch.

Some animal behaviorists interpret the grin as a signal of submission: For the moment, at least, they’re happy to do things your way.

Doggy smiles have also been mildly correlated with happy situations, such as playtime with their owners or with other dogs. It could also be that your dog has “caught” its smile from you.

Dogs are unique in their ability to communicate with humans — interpreting our facial expressions, connecting with our gazes, and expressing their needs and desires through that eye contact. They are much more adept than most animals at mirroring our expressions and gestures.

For this reason, animal scientists often focus on dogs and their owners in order to study social communication between species. This branch of biology is still in its infancy, but we can expect some fascinating insights to emerge. After all, dogs have been bonding with human beings for some 30,000 years

An exchange of smiles between humans and dogs typically marks a win-win situation. But is this simply a natural fall-out, or are pooches engineering the process step by step?

Science has yet to tell us whether that grin, for instance, is purely spontaneous… or whether it’s something the dog is doing deliberately in order to send a particular message.

What does it mean when Pitbulls smile?

This is one of many aspects of animal behavior that have yet to be studied in depth. Until truly objective, scientific methods have been applied, we can only go by the intuitions of experienced dog owners.

Most of them have a strong sense of when their pet is happy. For one thing, an unhappy dog has plenty of ways to signal distress. Bad behavior, including destructiveness, is often a signal of general malaise.

Other clues are diminished appetite and lack of interest in exercise and play. Sleeping a lot — about 16 hours a day, in fact — is the habit of a contented canine.

So what can you do to bring on more of those uniquely adorable pitbull grins? First, look to the dog’s general well-being. Second, smile yourself! And third, take advantage of times when your pet is obviously relaxed and content, and treat him or her to some pampering.

Dog or human, we all love to be fussed over. Praiseful speech, affectionate noises, and “baby talk” all have a measurable impact on the pleasure centers of doggy brains. In the context of good dog behavior, a yummy treat is seldom amiss. And as we all know, the language of touch is tremendous for communicating affection.

Attentiveness to your dog’s responses is what will make you into a pitbull whisperer. Most dogs love to be scratched on the top of the head or behind the ears, but there are subtleties of preference not only between breeds but between individual dogs.

Your mastery of these will deepen the bonds of affection between you and your pitbull. Some dog owners go so far as to train their pets to smile.

This is best attempted when the dog is already exhibiting signs of relaxation and contentment. If your pooch doesn’t mind you handling her face in such a moment, you can gently pull at the corners of her mouth and otherwise shape her face, while beaming at her.

At that point, you’ll probably look a wee bit ridiculous. How can she fail to show her amusement with a gratifying grin?