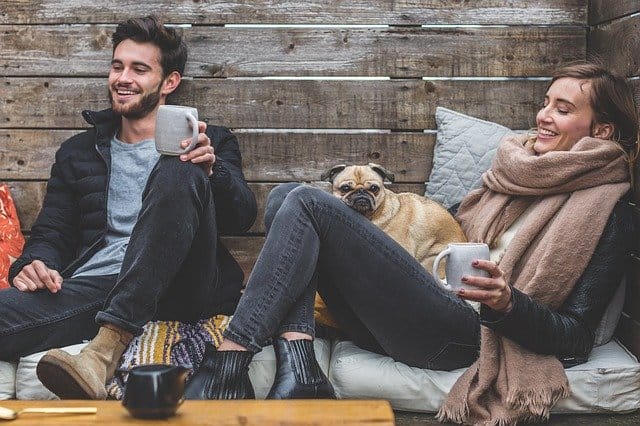 I know my dog will seek out physical contact with me due to a number of reasons but why does my dog lay on my chest? Why would they do that? Is it a sign of intimacy or is it something else altogether? Let’s dig a little deeper into this now, shall we?

A dog laying on your chest is often construed as a show of affection by most people but it can signal something that it is quite opposite of that. It can be a sign of domination where your dog is basically saying that he owns you.

Dogs have a way of communicating with each other and humans that is based on a number of body or facial gestures and postures. Direct eye contact, for example, is perceived as a sign of authority or domination.

In the same vein, it is also known to be a sign of aggression. A dog will communicate these signs subtly or very explicitly and in order to understand these signs, you need to observant and watch out for them.

Naturally, dogs are pack creatures and this pack mentality applies even in your home. Every pack has an alpha who is the one in charge.

The others either challenge the alphas position or submit. There’s no two ways about it. When your dog is with you, they work out whether or not they are in charge or you are.

They will push the boundary on occasion to see whether they can get away with things or you are able to take charge and lead them.

It’s a natural instinct that is part of their makeup. Generally speaking, it was survival of the fittest for their ancestors in the wild.

The dog in charge had to be strong enough to lead otherwise the pack could die. From time to time, this strength and authority is challenged by other dogs in the pack as a way, if you will, to establish whether the alpha was still in a position to lead.

This would go on until the alpha dies or a stronger contender got top dog spot. This is still part of your dog’s instinctive nature and ,in most cases, this behaviour is not sinister but birthed from a place of wanting to protect you as part of the pack.

One of the reasons that dogs take on aggressive behaviour around strangers is because they feel they need to take on the responsibility of protector if they do not sense that you are providing it.

They need to see that you are leading otherwise they will instinctively take on the leadership role and in their world that means showing signs of dominance.

Though this could translate as overbearing in the human world, dogs actually need to see this in order to feel safe around you. That’s the more extreme explanation to why a dog would lay on your chest. Let’s look at another reason.

Why Does My Dog Lay on My Chest and Stare at Me?

Another reason that your dog does this is as a show of affection but you need to be watchful so that it doesn’t turn into a dominance issue. Look at it this way; to your dog, you are their world. You are the reason that they exist. They want to show you that they love and appreciate you for all the things that you are to them and do for them.

This is more evident in situations where there is a genuine bond of affection between you and them. Most of the time they just want to be with and around you. Laying on your chest while in bed and then staring at your face in most cases is just what it looks like; a sign of affection.

When they are on your chest, they are as close to your face as they ever get during the course of the day and because they are pack animals, they long for that connection.

Feeling your breath against their faces and that closeness they experience when in such close proximity with you fulfils this instinctive need. Just make sure that they do not display any dominant behaviour as they do this.

They may do this especially when you spend the day at work and come back home at the end of the day. They want to spend as much time with you as they can. What to do if Your Dog Starts Exhibiting Dominant Behaviour As already stated earlier on, dogs instinctively want to take over a leadership role if they notice that there is a vacancy.

It’s not sinister but an instinctive reaction that they exhibit and it needs to be looked out for. When your dog gets used to laying on your chest while you are in bed, for example, you need to immediately stand up and assert your dominance.

Dogs understand these gestures and respond to them. This is especially true in cases where they are becoming possessive of the bed for example. You need to let them know that it’s your space and you choose whether or not to allow them into it.

They should never feel that it’s theirs otherwise you will have behavioural issues. Showing this dominance should not only be limited to when they are laying on your chest or in bed with you but it should be something that you do often during the course of the day so that it’s imprinted and they never challenge your authority in the first place.

A dog may experience separation anxiety and may lay on your chest as a way of making sure that you don’t go anywhere.

Over time, graduate to leaving the house for just a short period of time then coming back. Do this over and over again but each time, leave the house for a little longer.

When they see this, they gradually realise that whenever you leave, you will eventually come back. Dogs are trained through repetition and over time they would have overcome their separation anxiety.

Conclusion on why does my dog sit on my chest

When your dog lays on your chest, it can be one of two things. They can be exhibiting a desire to be close to you and spend as much time with you as possible or they may actually be exhibiting dominant behaviour. Observe your dog to make sure that their behaviour is not driven by the wrong instincts and nurture the right kind of behaviour.

Scroll back to top