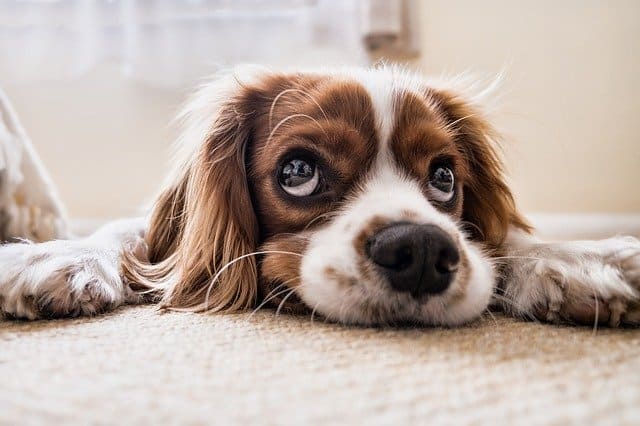 There are some things your dog does, and you are left wondering why your dog is so dumb. Sometimes you even think it does something intentionally.

“How dumb can you be, not to realize the object you are barking at, is inanimate?” The truth is, dogs can’t help themselves. At times what they do and you think is stupid has a reason. Here are some reasons why your dog could be acting dumb.

A dog is naturally a domesticated mammal with a little bit of a wild side, and It’s in its nature to be dumb. Sometimes those things you think are dumb are just in its nature.

When you find your dog eating soil, and it is just from taking its meal, you might think your dog is acting dumb. But it is not.

There is a possibility the dog lacks some nutrients. Or maybe you have noticed that your dog always makes a circle on the sleeping area before sleeping.

The dog is preparing the sleeping area. So it’s not as dumb as you think. It’s only that it’s challenging to understand every behavior the dog does.

2. The Type of Breed

But is it fair to call it stupid?

Bloodhound is a breed known for its sense of smell. So its brain is mostly developed to detect smells. As such, it may do some things you might consider dumb.

But, are they dumb, really? But if your dog is in the dumbest dog list, no need to worry. Each breed of dog performs a specific task.

So your dog may be dumb in one area but a master in the other. And generally, who cares if their dog is dumb or not? It’s not like humans. So it doesn’t matter.

3. Your dog didn’t socialize as a puppy

So, your dog keeps chewing everything in the house, shoe, tables, mat, and anything she comes across. As if that is not stressing enough, she barks on objects and things that are not worth a bark.

This makes you feel like your dog is dumb, right? But it may not be its fault? Did it socialize enough when it was a puppy? Most likely, it has no idea how it is supposed to behave.

Dog Breeds like Huskies are more social and playful in nature. It doesn’t know how to interact with other dogs and people. Don’t worry; you can help it. Take it out more. Let it socialize with other dogs.

When the dog gets old, it gets less motivated. Its energy levels also drop. So, at times when you try to teach it some new tricks, it might not be interested.

With no interest, the training process will take longer. When they get old, they want to do things their way. The way they are most comfortable.

So the perceived dumbness of your dog may be from old age. Go easy on it. Be patient with it. Train it diligently, and it will come along with time.

But at what age do we consider a dog old? That depends on a few factors: Its size and breed. Small dogs can live up to 20 years, while big dogs have a lifespan of around six to eight years.

But, like humans, every dog has its traits. It may be large and live longer than the small dog. So, make sure you find out the age of your dog and the lifespan of your dog’s breed.

5. Your dog is not exercising enough

So your pet can’t stop chasing her tail… Dogs are more like humans. They also need mental stimulation. They are also like kids. They need attention and playtime.

How can you exercise with your dog?

With these exercises, your dog will be mentally stable and will stop the dumb behavior

6. Have you trained your dog in different locations?

That might be the reason your dog is acting so dumb. Try training it in as many locations as possible. At times when you are in a different location than the one you trained it, the dog may find it hard to follow instructions.

Especially if the location you are in has a lot of distractions. The dog may find it hard to concentrate. You can start by training it in a location with less distraction and then go on increasing the location distractions so it can get used.

Do you know it’s possible to train your dog some habits you don’t like unconsciously? For example, your dog has the habit of jumping on you any time you get in the house.

Do you pat it when it does that? Or award him with something that you brought? You are the reason he can’t stop the habit.

Anyone or any animal can learn or unlearn a behavior through repeated reinforcement or withdrawal of the reinforce.

So, if you unconsciously reward him when he is doing something you dislike, you reinforce the behavior. Instead, award him when he does something the right way. That way, he can figure out how you want him to behave

At times your dog acts out because of unfulfilled needs. They will bark for no reason if they are not fed on time. They will chew the table and your shoes—especially the shoes because they don’t want you to leave.

It’s attention-seeking. They can’t speak, so they have to find a way to communicate. If you can figure what it wants and give it, then the behavior will stop.

How to tell if your Dog is Stupid?

Honestly, there is no accurate test to determine how dumb a dog is. Every profession has his or her way of explaining it. But it’s understandable; dogs can’t talk. Some of the tests used to determine the intelligence a dog are

Conclusion on why is my dog stupid

Some dogs are naturally dumb animals. Some are dumber than others. But the truth is no dog is untrainable. Some will take longer to get a concept than others, but with patience, all dogs can learn.

Scroll back to top