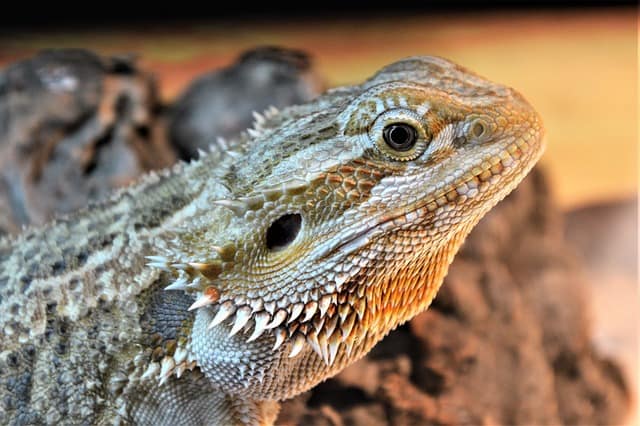 Stress marks on a bearded dragon usually appear on their stomach but they may also show up on their chins and legs.

They’ll look like dark lines or dark ovals on their skin, and they’re typically more noticeable during the daytime. There are a few reasons why your bearded dragon will have stress marks and how long those marks last will depend on what’s causing them.

Relocation stress is the most common reason why a bearded dragon has stress marks; if you moved to a new house, moved your bearded dragon into a different room, or even rearranged some furniture, it will require some getting used to.

If you just got a bearded dragon as a pet this may also cause relocation stress because they’ve been used to staying in one location for a certain amount of time and being put into a new one with different surroundings is a pretty big adjustment.

However, once your bearded dragon has gotten comfortable with their new environment, their stress marks will disappear.

Stress marks can also appear due to limited space in their tank and not having the proper temperature. The size of the tank will depend on the size of your bearded dragon; as they grow, their tank will need to grow as well.

A young bearded dragon doesn’t need a large tank since they may find the large space intimidating but they will still need some space to roam.

An adult bearded dragon will require more space so they can fit properly in their tank and roam with ease. It’s also important to make sure that there isn’t too much decor in the tank; you should create a nice habitat for them with hides, rocks, and plants but not go overboard in the process that you end up crowding your bearded dragon.

Keeping the tank at a proper temperature will help ensure that you’re not stressing out your bearded dragon. If they get too hot or too cold, they will develop stress marks because they can’t tolerate the temperature.

Loud noises and other pets can also be the cause of stress marks. Bearded dragons may think of your dog or cat as a predatory animal since they’re much larger than them, and a barking dog can easily intimidate them and make them show their markings.

A barking dog, loud music or loud television, children playing, and heavy traffic can also cause stress marks so it’s important to avoid loud noises. Some loud noises are out of our control and it’s hard to prevent them from happening but keeping your bearded dragon a good distance away from the window and the television can be helpful.

Putting their food in a place where they can see it but can’t reach it can also stress them out. If they hear the sound of an insect nearby and they can’t get to it, it could make them frustrated and stress marks might show up as a result.

It’s also possible for stress marks to show up on your bearded dragon because they’re bored. To stop them from getting too bored it’s essential to have tank decor that looks as natural as possible.

Bearded dragons need places to climb on, places to hide in, and places to bask on. It’s also important for you to interact and play with them. Giving them new food or a new toy can help provide the stimulation they need. Taking them out of their tank for a while and handling them regularly can also help prevent them from getting bored.

After a while bearded dragon stress marks tend to go away, as long the pet is well-taken care of and happy.