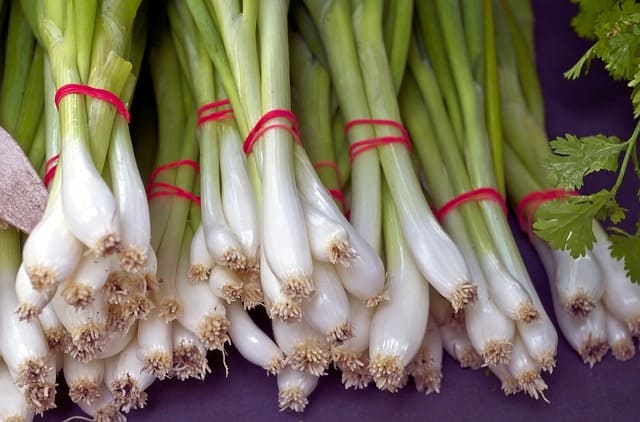 Green onions are a tasty part of our everyday meals but can dogs eat green onions? Is it safe to give Fido leftovers from last night’s dinner that contain green onions? That’s a question that we seek to answer in this article plus a few other ones.

Green onions are milder than other types of onions hence the reason for people wondering whether or not it is safe for them to feed their dogs green onions. Small amounts of green onions will not affect your dog that much but large amounts are toxic enough to kill red blood cells in your dog which may lead to liver damage then eventually death.

You want to make sure that your pet cat is kept away from onions as much as possible. Though small amounts cause some mild reactions, you don’t want o take the risk because they could be life threatening as we are going to see in the rest of this article.

Are green onions bad for dogs

You obviously love your dog and would do the utmost to make sure that they are safe and healthy. You probably look at your dog as a part of your family; your child even.

Who doesn’t want their child to be safe? The difference between this baby and your other two legged children is that they are not the same physiologically.

Their internal organs are way different from ours. It’s like a give and take really; their digestive system is able to break down bones and that’s why they can eat wild animals without any problems yet there are some things that we consider safe that are lethal to them.

Onions fall into this category along with chocolate, coffee, grapes, raisins, saltanas and alcohol. Any of these can cause symptoms ranging from a mild discomfort to death.

In the case of onions, a chemical known as n-propyl disulfide is the main culprit. It attacks the red blood cells of your dog and if left untreated and depending on the amount consumed, liver damage may occur and even when treated, your dog may recover but never be the same again.

That’s how seriously you need to treat this issue. It’s actually a life and death situation for your four legged friend. You want to make sure that you keep their food clear of them and to also make sure that you don’t leave them alone in the kitchen while preparing food where they can grab some food of the counter for example.

How Much Onion is Toxic for Dogs?

As stated earlier, small amounts of onions will cause some level of discomfort and a bit of diarrhea which your dog will recover from in about a few days but large amounts are toxic.

So, you may be wondering, how much exactly is a large amount? That is a relative question depending on dog size as well as age.

Puppies and smaller dogs are more at risk than larger ones when it comes to quantities consumed. Generally speaking, 100 grams of onions per 20kg of your dog’s weight has to be consumed to be considered toxic.

100 grams is about the size of a medium onion. If your dog is bigger, it will process the toxicity better than a smaller pooch would. You want to always monitor your dog’s behavior to make sure that they are not showing any signs of poisoning.

How To Know Whether Your Dog has eaten Onions 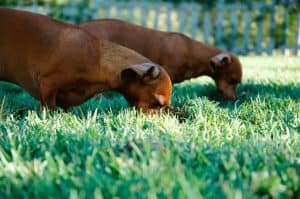 How do you know whether your dog has eaten onions and is suffering the side effects? There are a few signs you need to watch out for.

Symptoms may begin to show anywhere from 12 to 24 hours after exposure to about a week. Because the toxins in onions attack the red blood cells, the symptoms you are going to see in your dogs are anemic ones.

Early symptoms can include vomiting and diarrhea. Other symptoms include dark yellow or bloody urine. Your dog may also become breathless and weak which is exhibited by your dog becoming less and less active with time.

The heart will also begin to beat much faster and the gums will become pale or yellow. These are symptoms mainly associated with anemia and they usually take about five days to a week to appear.

What to Do if My Dog Eats Green Onions

So, what do you do when your dog ends up eating green onions? If you see him or her eating the onions, take note f how much they have consumed.

If it’s a small amount, there isn’t that much need for an alarm. Your dog may develop early-onset diarrhea and vomit a bit but they should recover within a few days or so.

If, on the other hand, they consume a large amount, you will want to call your vet immediately. Early intervention could be the difference between life and death for Fido.

If you leave it till late, you might risk liver damage and even if they do recover, they will not be the same dog again.

If you don’t see them eating the onions but do notice that they are showing some or all of the symptoms listed in this article, you will want to make sure that you consult a vet immediately.

The sooner you do it the better. That’s why it’s a good habit to monitor your dog’s behavior often and to check them every once in a while for signs or diarrhea, shortness of breath, high heart rate and any other symptoms. Just don’t be paranoid about it.

Conclusion on green onions and dogs

So, to conclude, can your dog eat green onions? Though green onions are milder tasting than other types of onion, they still are dangerous to not only your dog but cats as well.

Remember, the smaller the dog/pet, the higher the risk. Onions in any form whether, cooked, raw or powdered are not good for your dog and you need to make sure that they are kept as far away as possible from them.

Also check out the article I recently wrote about can dogs eat sour cream.