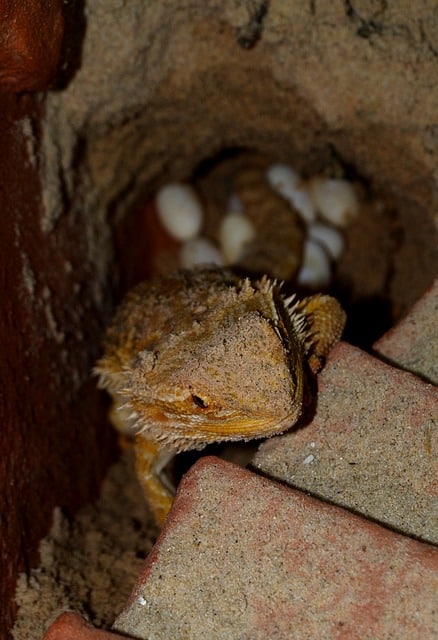 Bearded dragons were introduced into the United States as pets during the nineties and have become increasingly popular as exotic pets.

They are known to be one of the favorite pet lizards of the world because of their size, poise, and their appearance that has attracted many over the decades.

Not only do bearded dragons make fantastic family pets, but are also very easy to breed. It is important to consider the reproductive process of a bearded dragon before getting yourself one.

Keep reading this article to know more. Bearded dragons lay eggs in cycles known as clutches. During their lifetime, they can lay three to six clutches with twenty to thirty eggs per clutch.

The breeding of bearded dragons depends on their physical size more than it depends on their chronological age. Typically, however, they come off their breeding age when they are between one to two years of age.

It is advisable that the female bearded dragon is at least two years old and the male is at least one year old while mating.

. A female bearded dragon that is too young to mate may lose a large amount of calcium in her body. This may stunt her growth, cause bone malfunctions, and shorten her lifespan.

When do Bearded Dragons Lay Eggs

Bearded dragons can breed many times a year. However, it largely depends upon brumation. They breed about a month after they have come out of brumation. Naturally, they mate only twice per year. Female bearded dragons may be given calcium supplements while they’re pregnant.

When she becomes ready to lay eggs, she begins to hunt for a suitable spot to lay them. Once she has laid her eggs, she starts burying them

How long does it take bearded dragon eggs to hatch

After this, it takes about fifty-five to seventy-five days for the eggs to hatch. The hatching time of the bearded dragon eggs also largely depends on factors such as humidity and temperature.

The eggs deflate a day or two before hatching and start? sweating’, that is, tiny water droplets appear on the eggshells.

There is a small egg tooth on the snout of baby bearded dragons which is used to slice open the eggshell. Then the dragon’s head and snout peep out.

It is important to remember that these baby dragons do not need any assistance to come out and are completely able to emerge out of the eggshells on their own.

Usually, they come out of the shell completely within a day or two. It is also important to remember that multiple baby eggs should not be kept together in one enclosure or they fight each other to death. Keep the baby dragons away from each other and ensure that they have sufficient space.

Conclusion on how often do bearded dragons lay eggs

Bearded dragons are, without a doubt, one of the easiest species of lizard to maintain in a captive environment. However, they can only lay eggs.

They can’t take care of the eggs by themselves are leave the eggs to hatch by themselves. As the owner of a pet bearded dragon, it is important for you to keep it hydrated and provide it with enough food. I hope that this dragon was helpful to you to understand how often bearded dragons lay eggs