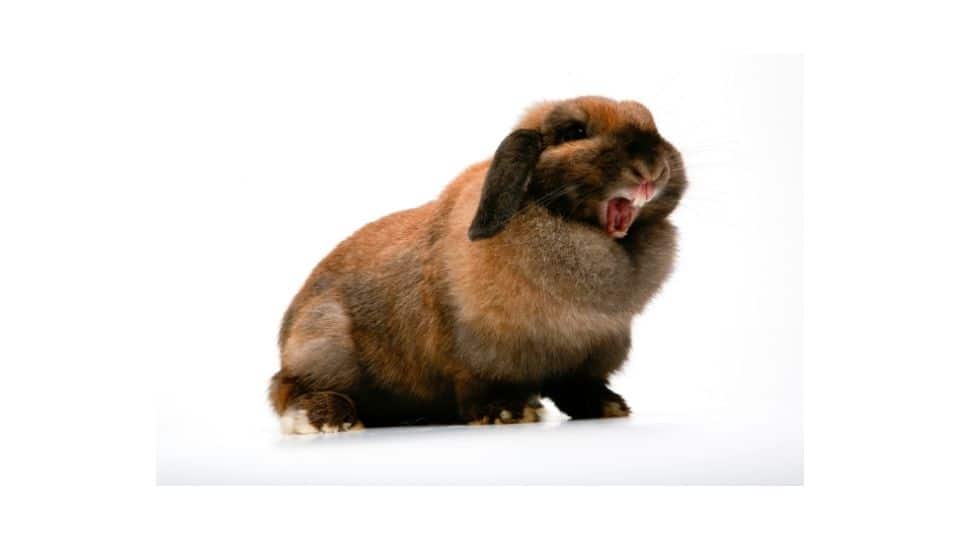 Rabbits thumping is a sign of aggression. They are doing this to “pump” themselves up so they can either chase away unwanted visitors or defend themselves if necessary.

If you have an unusual bunny and he ever thumps, it may be a sign that he’s more than a little irritated by your behavior. If you notice that your bunny is thumping when you’re petting him, stop petting him for a moment and then try again.

He may be letting you know he doesn’t like the way you’re patting him.
You can tell if your bunny is mad at you if his ears are pinned back against his head and his eyes are narrowed into tiny slits.

He may also be hissing or growling. If you have a new bunny, this is something to watch for. Rabbits don’t always appreciate being picked up by the scruff of their necks and it may take time for your bunny to get used to you picking him up or touching him in any way.

You can try rubbing a towel over your rabbit’s back while he’s in his cage so he’ll get used to having things touch him and/or gently petting your bunny while he’s relaxing in his cage.

Do rabbits thump for attention?

Rabbits thump for a variety of reasons.

Thumping is a way of saying “Hey! Over here!” They may be giving this behavior as a warning to something they don’t like, or it can be a welcoming thump to another rabbit or their human family members.

If you see your rabbits thumping, treat them with courtesy and respect – don’t yell at them or chase after them.
Because every pet responds differently to training, the best thing you can do is observe your rabbit’s behavior and try to identify which reasons he is thumping. Ask yourself, “What does my bunny want?” He may want to go outside so he can mark territory or relieve himself.

Do rabbits thump when they are happy?

When a rabbit is happy, the thumping may occur more intensely and with a higher frequency. (In some ways it usually sounds like a faster heartbeat).

You should also pay attention to the different ways that your rabbit thumps. If he thumps to show happiness and curiosity, his ears will be up and his body will be relaxed. Rabbits will sometimes squeal with excitement when they are happy and thumping (kind of like a high-pitched version of purring).

Your rabbit may also erect some of his fur (almost getting into a “furry ball”) or hop around in a circle before returning to thump again. If your bunny is angry, the ears will be lowered against the head and they may have a narrow, slit-like appearance.

The body language is stiffer with some teeth showing at times.). The rabbit will often strike the ground forcefully and repeatedly with their front paws while they’re thumping.

Do rabbits thump when angry?

Rabbits thump when they are angry or want to chase something away. They will back into a corner and prepare themselves for an attack. Some rabbits will also growl, screech or hiss if they’re angry.

If your rabbit is upset with you while you’re petting him, stop immediately. As long as you do not continue to pet him, your rabbit will relax and go about his business (whatever that may be at the time).

Continue touching your rabbit after he’s thumped and he may become defensive and try to “get rid of” the annoyance in his cage.

Remember that rabbits live in groups (or flocks) so they can feel threatened when they hear unfamiliar noises around them. Pay attention to his thumping and learn to distinguish between a happy, curious thump and an angry or aggressive thump.

Why do rabbits thump when put down?

1. Because they’re annoyed.
2. Because they want to be picked up again.
3. Because you pet them too much.
4. To show that they are upset about a certain behavior or event.
5. To express their anger (as with a warning).
6. To send a message to other rabbits in the area and let them know that he is ready to defend himself and his territory from any intruders who may be showing signs of aggression toward him or displaying quarreling behaviors with one another (which can lead to some pretty roughhousing between your rabbit and another rabbit in your area).

Rabbits thumping too much?

Some rabbits can get overstimulated with affection once in a while and get overly excited. If this happens, stop petting your bunny immediately! He may be nervous if he’s been picked up or constrained too tightly.

The best thing you can do is to give him some space until he’s relaxed again. You’ll know when it’s time to start petting again if your rabbit starts doing some of the behaviors I mentioned in the “Happy” section above (ears up, body relaxed).

This is especially important if you have children. We all know that kids love their animals, but sometimes they can get a little wild when they’re playing with the pet. Be sure to tell your kids to stop and give their rabbit some space if he’s thumping too much or getting too riled up.

If your bunny is overly anxious and thumping excessively, you may want to make an appointment with a feline-experienced veterinarian for a check-up.

How do you calm a thumping rabbit?

Sometimes, a rabbit can get so worked up that he won’t even notice that you’re there. He may thump his heart out and not stop until he’s exhausted.

If your rabbit is in this type of situation, you just have to leave the room for a while. It’s best to give him some time to calm down on his own before you try to pet him again.

After the rabbits calm down for a few minutes, return and talk softly and calmly while you pet him again. You’ll be able to tell if he’s still agitated because the ear position will be more relaxed and they will still be erect (not flatten against his head like when he is being aggressive).

I hope this article has been helpful! If you have any other questions, leave a comment below.
Have a great day and remember to take good care of your pets!